Maurice Hayler is a practising architect specialising in graphics and photomontage. His interest in botanical illustration began as a child in Sydney, on the east coast of Australia.

Amid the sun and surf there were wet summers spent at the Australian Museum and the harbourside Royal Botanic Gardens. His mother, who was an artist as well as a keen gardener, inspired his lasting interest in flowers and plants.

His earliest subjects were the exotics that dominated Australian life at the time — mostly rendered in coloured pencil — but at eleven he took up his brother’s box brownie camera for the first time. 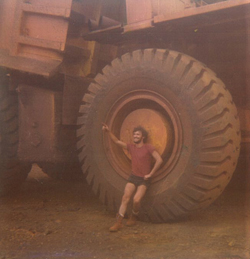 The 1970s saw a generalised interest in Australian Native Plants, although many of the specimens being planted in Sydney originated some 3,000 kms away in Western Australia. As a 21 year old Maurice set out on a journey in a Mini Moke across the continent and up the west coast of Western Australia, a journey of 4,000 km. Here he found the Sturt Desert Pea and a mining job driving a truck the size of a house.

Today he brings to his botanical illustrations the same mix of art and discipline he applies to his architectural renderings, with over three decades of experience in applying photographic and artistic interpretation to the subjects he loves. With contemporaneous printing techniques using archive quality paper, original, affordable and enduring Australian botanical art is here for your enjoyment.

Testimonials
“I just wanted to say a huge thank you! I received the prints today and they are absolutely beautiful and better than I could have imagined. Thank you so much.”
“I just rang to say your prints are gorgeous and so beautifully packed I re-used your packaging to send them overseas!”
“Thank you so much for my four A4 Botanical Prints, I knew they would be beautiful but they really are exquisite. I have framed them in white and they will certainly be admired every day.”
“It was such a pleasure drooling over these stunning pieces online then using the collection by state option to choose a plant local to my area. Maurice's work is detailed and gorgeous, and I can't thank Kristi enough for her help arranging everything and dispatching it express post, and for being an absolute hoot to deal with both over the phone and online. I've purchased this as a farewell gift for a colleague but am now looking at options for my own walls.”
“I wanted to let you know that [our daughter] LOVED her prints. When she looked at the website, she wanted them ALL but of course was grateful for our choice. Maurice's work is very inspiring and so very beautiful. Many thanks for your help.”
“Prints arrived this morning! They are absolutely stunning in person. Thank you so much for getting them to me quickly and creating a lovely shopping experience.”
“Just letting you know that N. absolutely loved the prints (particularly the Sturt Desert Pea which is her favourite flower) and was so impressed when I told her about your service. You’ve absolutely made her Christmas, so thank you. From what she said I think she’ll be buying another two prints shortly!”
“I’m just so grateful for your service, it’s rare to find a business owner as good as yourself!” [Thank you!]